You know you want some of this. 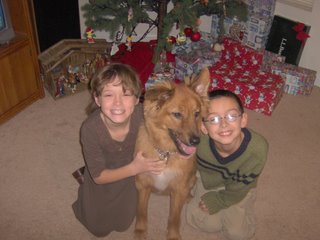 I know God loves everyone.

I really believe that.

I really think he loves me just a little bit more than he loves anyone else.

People always think I'm crazy when I say that what with the getting left by my first husband while pregnant and dealing with infertility now at the age of thirty-one and the amazingly large number of insane people I seem to encounter on a daily basis and all. But really, I am an amazingly lucky person.

I've always believed God has a good sense of humor. I think this was evidenced by the fact that he gave me a set of twins at age 22 and had slightly less than no idea what I was doing. When I was seventeen I was told I would never, ever have children. My doctor now says I'm suffering from secondary infertility, but I don't believe that. I honestly believe that I'm infertile. I've always been infertile. My twins were just a little gift from God. One that I completely do not deserve yet am extraordinarily thankful for.

I don't know how I ended up with such amazing people to be a part of my life. I just know I am unbelievably lucky.

That's why God likes me best.

Also, he thinks I'm funny and doesn't mind the number of bad words I say daily.

I know I certainly do.

Look at HOW freaking big Ginger is! Well ya know the twins too!

God has blessed you..and he may just like you best.

Yes, you are definitely well liked!

I like you too. Can you put in a good word for me with God? Ya know since you're buddies & all. heehee

I'll pay you a bagel, an ice cream sandwich, and, um, 64 cents to get those pictured in this entry (with a side of you plese!)

I'm glad God likes you and I'm glad you know it. You definitely are damn blessed.

Thanks for stopping by!

You posted some of my very same sentiments about being so very lucky. I feel that way too. Infertility and secondary infertility were both awful. I feel for you.

I'm very glad to hear that God doesn't mind you swearing so much. Can you ask him if he's cool with me that way too?

It bugged me all afternoon that my comment came off bitchy and not the way it sounded in my head. If it did sound bitchy, I'm sorry. You really are blessed & the kids are adorable.

No worries, I didn't think it was bitchy at all.

Hey now, I thought God loved ME best! No? Who knew. What about "Jesus Loves Me?" Should I stop singing that to myself? Probably should anyway considering the looks I've been getting.

Too bad you don't live by me. I've always wanted to be a surrogate. Seriously. Almost did it once for a gay couple I know.

Those twins, and that dog are awesome!!!

You're right. God loves you more than anyone. And the same is true for everyone. How can that be? Simple. God's love is perfect. Ours isn't. God is awesome and He does indeed have a great sense of humor. That's why there's people like us in the world. http://trammells.blogspot.com/

Probably also why there's certain other types of people in the world also. The Bible tells us that "...one person has this gift, another has that..."

And possibly why some people are here to merely serve as a warning to others.