I have a crush.

It's not on Brad Pitt or Luke Wilson or any of those other guys that normal girls find attractive.

My crush? It's a 64 year old former Senator from Tennessee.

Yes, ladies and gentlemen, I have a huge crush on... 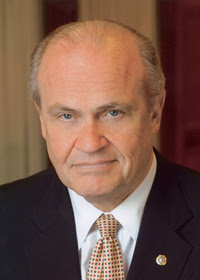 As I've mentioned, I'm just ever so slightly obsessed with the television program Law and Order. The very first time the character of Arthur Branch appeared, I literally jumped up out of my seat and shrieked, "IT'S FRED DALTON THOMPSON!"

Jason, typically, was not impressed.

"Who's Fred Thompson?" he asked. Oh he, of Connecticut heritage.

He ONLY took over the senate seat vacated by Al Gore in a landslide vote. And appeared in The Hunt for Freaking October. And CURLY SUE! CURLY SUE!!! People! The man can multi-task!

I have no idea why I have a crush on him. He's not really hot or anything and I think he's friends with Scooter Libby. Honestly? I don't even know if I'd vote for him.


Don't tell anyone. Okay?
Posted by That Chick Over There at 6:26 PM

lol. you are very honest ;) I must admit I have a lot of crushes. Some last a lifetime and others can change like the weather lol. He is kind of catching.

I love Fred too! And my husband thinks I am a freak because I knew he was a politician and in Hunt for Red October. I didn't know he was in Curly Sue though.

My other movie star crush- Tommy Lee Jones. Don't know why, but The Fugitive- hot damn!

I definitely get where you're coming from...I'm a Law and Order freak too! We've got four seasons on DVD so far. For me it's his voice though...mmm....luverleeeee....

you are to funny.
I have some older crushes to but I don't know if I want to claim them yet..hehe.

I always know I'm going to have a rollicking good time when I visit your blog; and this post did not disappoint.

I get your Fred crush. I have one on former Israeli prime minister Benjamin Netahyahu (okay, I love him but don't know how to spell his name).

Your secret is safe.

I always thought it was cool when he would be on Law and Order one day, then giving political commentary on CNN the next.

You are too much! I just got done reading your previous post and I don't even have to ask who your boy child takes after. It is there for all the world to see. :)

Wonderful story - that has brightened my day.

Bethany: I LOVE Tommy Lee Jones too! He melts my heart in Double Jeopardy! Amazing movie!

You would die if you knew who was on my "get out of jail free" card. I don't think this crush is weird at all! :)

You are so funny. Hubby and I like to watch Law & Order too. Sometimes I wonder if he secretly hearts Fred Thompson...but don't tell anybody.

I have a massive crush on Christopher Meloni from SVU. And Vincent d'Onofrio from CI. Oh, Vincent, how I love you.

I have further more unexplainable crushes on Jack Black and Billy Bob Thorton.

That guy is handsome. And I recognized him right away.

I thought the following quotation - may identify your attraction:

''You gave me the key of your HEART, my love; then why did you make me knock?'' Oh that was yesterday, saints above! And last night -- I changed the lock! John Boyle O'Reilly

Hope at least it brings a smile!!!

Or is further analysis required???

He was also in Days of Thunder! I loves me some Law & Order too. I like Fred Thompson the actor but not so much the Senator. I think he should stay on the show, myself. I will miss him if he decides to go back to politics.

It's okay...you're obviously not alone :)

My husband makes fun of me mercilessly for my adoration of Kevin Spacey. I don't understand it myself.

John McCain and I would like to accept your offer of a double date with you and Fred.

I also have a crush on Christopher Meloni. That man is H-O-T HOT! As Fergie would probably say.

Well Chick I must say I dont get the attraction, He reminds me of Dr Phil eww. But yeah too funny.

i do love Fred Thompson and get excited when i see him in anything too - but it's not at the crush level!
nothing wrong with honesty!

I much prefer Sam Waterston. He's sexy for an old fella.

I have the same crush.

i know where you're coming from...i once had a "girl" crush on Oprah!

Hangs head in shame, I have never heard of him before either, but he is rather charming.