Really, I suppose it's not odd. He's that age, of those men and he was drafted out of a poor coal-mining town to see all of his friends die. I believe the average age of a solider in Vietnam was 19, and my dad was 19.

Oddly, only, that he never, ever, ever talks about it. About what went on there.

Obviously, I never knew him before he went there. I wasn't even thought of until about four years after he came back. I believe though, that it changed him.

I imagine that's war does. It changes you.

My dad is one of the most amazing people I've ever met in my life.

I'm certain he did not want to go to Vietnam. He did not voluntarily join the military. He had a really young wife and a baby on the way. He was drafted to go and he went. He did his best and he instilled in me, and all of his children, a sense of pride in our country and honor for serving it.

It amazes my little children that their Pappaw was in a war. They just can't believe it. All they know of war is what they see on television now. Once my son was reading his atlas (shut up, he's a geek like his mother) and he found Vietnam on the map and he got very upset and asked me if he would have to go there someday to fight. I told him, no, the Vietnam war was over years and years ago. He looked at me solemnly and said, "The war will never end Mom. It will never be over."

I wonder, sometimes, if that's the way my dad feels inside. 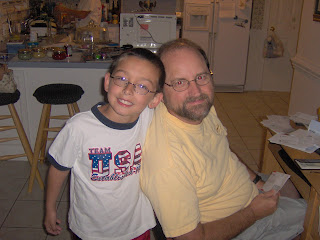 Not because of what he did in Vietnam. But because of who is he, now. Today. The battle is different now. Now, he fights cancer. He does so with humor and grace and dignity.

When my first husband left me and I was dying inside, he drove his van eight hours, deposited me, my two babies, and as much of our stuff as he could fit inside of it and took us away from there.

When I decided to go back to school, he drove out of his way by twenty minutes to pick up my little children at daycare, so I could go to class.

When I moved to Tennessee, he was heartbroken. But he also understood. He also wants us, our family, to be successful. He also understood our success could not come if we remained stagnant.

When I graduated from college he was there. Even though he was miserably sick from chemotherapy, he was there. He had to climb stairs and it hurt him, because not only does he have cancer he has two slipped discs in his back and a torn meniscus in his knee.

He was there and cheering as loud as anyone.

All of these things, and a billion more, make him my hero.

If you agree with the war, or if you don't, it's Memorial Day. Hug a veteran. Hug a serviceman or woman.

These are our people. And that's what it's about.

The people.
Posted by That Chick Over There at 7:41 AM

This post brought tears to my eyes. Your Dad sounds like a wonderful, wonderful man!! He's my hero, too!! Not just for being a veteran, but for all the things he's done as a Dad.

God bless your DAD. What a wonderful entry. . .and what an awesome man.

Thanks for a very personal reminder. This was great.

I have always thought of you to be good people.
Now I know it is because you come from good people.
Your children are blessed in so many ways.

My father fought in the Korean War and in Vietnam. And I agree, I think it changed him as well because that is what war does.

I say thank you to your Dad today as well as all of the others that have fought for our rights.

I love it when you speak of your dad. He really is a fabulous human being.

What an awesome Dad you have! You are very lucky and blessed to have such a wonderful, strong, supportive man as a father.

My Dad was in Vietnam too. My Uncle and Grandma have always said he came back a totally different person. Since Desert Storm he has been battling Post Tramatic Stress our family has been greatly affected by it...

Beautiful post...a poignant reminder. I was going to say that your Dad sounds awesome, but the word "sounds" doesn't belong in that sentence. It's pretty clear that he is.

What a great dad you have. My grandfather will not talk about his experiences in WWII either, I wonder what happened to them that leaves them unable to talk about it. It must have been horrible, whatever it was.

I hope your dad wins this battle.

Your Dad sounds amazing Chick. Your post made me cry. I am so glad that you have your Dad. My Dad was in the army. They think thats why he got sick from the chemicals from the Vietnam war. He didn't go but he helped in Germany with the bombs. He got cancer when I was ten and he died when he was 34. Your post was so touching.

Hugs to you xx

My dad signed up for the military and served in vietnam. He talks to my hubby about it but that is about all. Sometimes he will tell me things but he doesn't tell my mother anything. My dad went away on his first tour of duty to come back to his young wife handing him divorce papers and 8 months pregnant after he had been gone for 10 months. He turned around and went right back hoping to get killed the next time. Fortunatly he didn't or I wouldn't be here.
I don't think Vietnam changed my dad so much he had a very hard life prior to it and his experience with his first wife are harder on him. His family says his time there was actually better for him and the second tour when he wanted to die was what made him stronger after surviving some of the things he did he knew he had some purpose other then heartache.

What a beautiful post! I'm sitting here with tears in my eyes.

Nice post, nice tribute to your father. May he win his battle with cancer and live long and be a constant in your children's lives.

Yes, I decided to come back to blog land....I've been bitten by the blogging bug and it has me addicted to typing out my thoughts...a new season, a new blog, hopefully some new thoughts...

Send your dad hugs from me today too...And thank him for me for his bravery and strength...

I love your Dad- and I love the person that he has helped you become!

Your dad is amazing!
I have great admiration & respect for those who are serving/have served our country!
Happy Memorial Day!!!!

What a thoughtful and beautiful tribute to your dad. I'm thinking he's my hero, too!!

You are a lucky, lucky girl, and he is a lucky man to have a daughter such as you!

Awesome post, awesome Dad. I wish I had such a Dad. Can you adopt me into your family?

Your son, he amazes me. What an astute young man. He is so right about war. So right.

What a beautiful, beautiful post... So perfectly put Chick.

My daddy is my hero too.

Your dad has to be awesome- look how great a job he did with you!

That picture of your dad and son.

OMG I'm so crying here! That was the nicest, sweetest post ever! Your dad does seem like a hero, a hero of life and that is awesome!

My Dad too was in Vietnam..and like your dad, never talks about it. He still has many issues as a result. I learned the hard way, never EVER sneak up on him, he is still to this day extremely jumpy. And if there is a loud noise he isn't expecting watch out! It's very sad to see...all of a result of a war how many years ago??

I have some friends and have heard stories of them over in Iraq..and when they come back! OMG it's devastating! Just the emotional stress of it all...They are all HEROS!!

I'm just reading this today, but I hugged my dad on Memorial Day. He served in Vietnam, too. You're the best Chick. Give your Dad a hug for me.

That is amazing. I wish I had that in my father. My grandfather was in the Korean War that so many people forget about. Even though he died when I was 13, still think of him often, ecspecially during Memorial Day and Veterans day. Tell your Dad that we all thank him.