I try hard to be a good person. Not that I succeed or anything. But I really do try.
Part of my being a good person is spending time with the Girl Scouts. Even though I will be 32 years old in exactly one week, I am still a Girl Scout. Honest and for true. I have a membership card and everything.

I actually LEAD the group now. In as much as someone as lost as I am can lead anyone or anything.

But anyway.
On Saturday, my little Girl Scout troop had an activity at a local nature center. 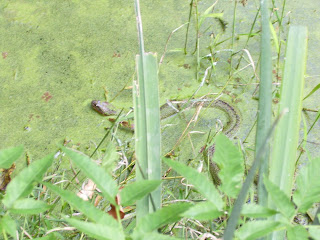 Seriously? I did not want to be his friend. But I named him Willis, all the same.

These two didn't want to be his friend either. 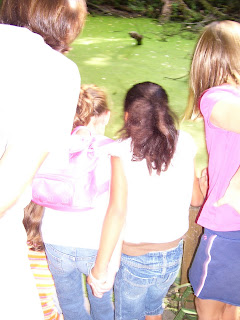 Note how they are clasping hands tightly. I so totally don't blame them. 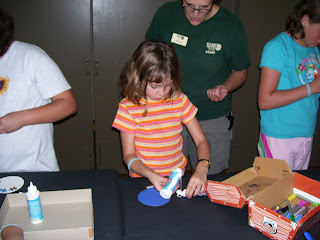 We also made Christmas ornaments out of old puzzles. It's called recycling people! Not crap! Recycling! 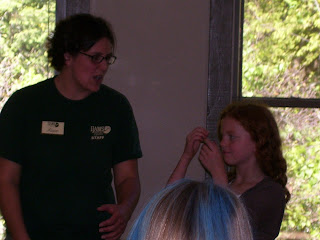 We played a game in which we learned about water and water conservation. That's not me, but isn't the lady with the glasses so cute? I want to be her friend. For reals. She was awesome. 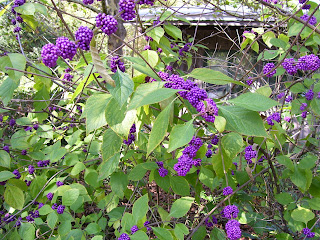 We took a hike. It was approximately 200 degrees outside. I stopped on the pretense of taking a photo of these lovely berries. Truthfully? I stopped so I wouldn't DIE.

These are called Beauty Berries. Or I'm a complete liar. Either way.

Overall it was a very good day, despite the oppressive heat and that one of my girlies got a really bad nose bleed BECAUSE she got overheated. We learned a lot, got some exercise, and got to spend time together.

The best part was walking along in the woods, with these girls, and them telling me the stories I don't know about them yet. I want to know all this stuff about them. I have such high hopes for these girls. 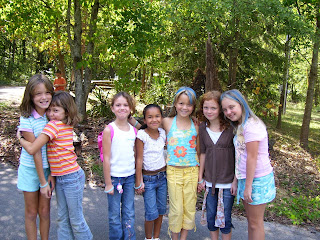 Also? I have no idea what the blue hair is about. I don't understand 10 year old girls.

But that doesn't mean I won't try.

You know who is amazing? YOU ARE!

Would you please remain a wonderful GS leader, so that in 7 years, when Caroline needs one, we have someone we can trust. . . ? Please?!?!?!

OK I wanna get your girls and my girls together, and the cuteness will kill us both.

I'm so glad you posted today! I was dyyying here at work and you save me with not only a blog, but PICTURES! Glee!

That is funny...I always called it crap, not recycling! You do a good thing.

You are a better person than me, I know this for fact because:

2) I actually understand the blue hair, I've had it myself...

3) I would have run screaming from the snake. I don't do snakes... At all.

I think I love you. In the sweetest, non-weird way. I promise.

They all look like they had a great time!

I totally want to be a girl scout and join your troop!

If I don't have any daughters, I might have to start a Girl Scout troop anyway. I LOVE that you're doing this, and I just want to hug and high five all the girls in that picture. <3

Awwww :) I only made it through Brownies, never actually achieved full Girl Scout status. I hope my K will join GS someday. Maybe I'll even be able to help out. Maybe. You're a far better mom than I am. lol.

Oh, and as someone who's hair has been many un-natural shades, LOVE the blue hair.

You're a great mom Chick! I would have totally flipped out b/c of the snake. Those girls look so happy and it's so cool that you are doing this for them!

You live near snakes? Remond me of this when I decide to go all stalkerish and tell you I'm coming to visit. Though I suppose if i was actually a stalker i wouldn't tell you I was coming would I?

My daughter just started Pathfinders, sort of breaks my heart, what happened to my little Spark?

Love the pic of the girls. They all look so happy. Usually you have one who looks like a miserable so and so but not in your group.

That title made me giggle out loud. Cause you have such a way with words that makes me WANT TO READ more of you. Yay Chick. I'm glad you became one with nature & survived. Willis looks scary. I would've high tailed it the other direction. Maybe blue is the new blonde?

OMG, I remember when I was in Girl Scouts. It was so much fun. Only, we weren't allowed to dye our hair blue, but whatever.

glad you had fun and didn't overheat.

Once a Girl Scout, always a Girl Scout but I do have to admit that I dropped out after Cadettes because at the time, being a Senior wasn't cool anymore. The way my life turned out shortly thereafter, I would have been better off to have stayed. Sometimes lessons are learned a bit too late. Keep up the good work. It looks like so much fun ... I had boys and just couldn't get into helping out with the Boy Scouts.

I love that you are a girl scout leader! It sounds like a lot of fun because for some odd reason I like girls at that age!

I think it's wonderful that you take the time to spend with these girls. The world needs more people to do this kind of thing.

And that snake? EWWWW!!

I'm so jealous! I want to be a Girl Scout! It looks like you guys had so much fun!

Would you mind sharing how you made the puzzle ornaments? I have kids here constantly, which means my tons of puzzles are missing tons of pieces! (Why I don't just throw them away, I'll never know.)

Think people would look at me funny if I had blue hair?

You don't give yourself enough credit!

You so totally Rock!

Girl Child is so lucky to have you as her mom!