I got an email recently from someone who reads my blog. I won't get into the specifics, because the email is private, but it was a very nice email and at one point the writer said that I deserved a baby.

The email was really sweet and I really appreciated it, obviously. I just kind of got stuck on the word "deserved".

Because, why do I, or anyone really, deserve a baby when someone else doesn't?

Sometimes I get pissed off when I see people who are pregnant who are treating the children they already have like crap. One of the main reasons I hate Wal-Mart so much is that every single time I go in there some slag dragging around three or four kids who are completely unwashed and nasty looking and she's eleven months pregnant and verbally abusing the children and smacking them and stuff. I get really, really, REALLY pissed off when someone has a child and they don't appreciate that child and do things like knowingly allow the child to be abused. And don't get me started on people who are pedophiles. I wish they were all dead, pretty much.

But when other people get pregnant, especially people I love, I don't get mad. I don't feel like I deserve it and they don't.

And I don't necessarily feel like I deserve a baby.

There are a lot of women out there who don't have any children who would love to have a child. A lot of women would probably be a lot better mothers than I am and teach their children that saying things like "doucheholes" and "assbiscuits" are wrong, instead of being like me and laughing a lot. There are some women who have more money in the bank than me and can stay at home with their baby and probably have a hell of a lot less mental issues than I do. And they can't pregnant either. 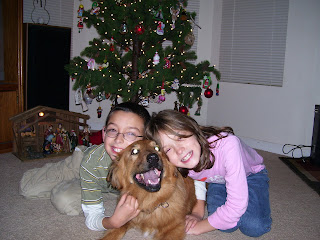 I'm not even sure I deserve what I already have.
Posted by That Chick Over There at 4:52 PM

Awww! Yes you do...look at those happy kids, you made them this way!

Your kids could have only gotten that happy with YOUR help! From what I've read so far, you deserve everything good in life!

Assbiscuit..I'll have to remember that! My oldest has already picked up on a ton of bad words we've only used once or twice. I said "F*ck a duck" one day about 3 months ago and he STILL hasn't let go of it!

I don't think you have anything to worry about as far as how great a mother you are and how great your kids are!

You deserve a baby, you really, really do, you are a sweet, and good, person. You deserve good things.

The world is full of people who get more than they deserve and people who get less. If good people only had good things going on in their lives, we'd all be good for the wrong reason. Being good (okay, yeah, I know, define good, right?) for the sake of it rather than the rewards -means- something. You didn't do a great job raising your kids because you thought maybe God would say, hey, That Chick is a good mum, she deserves another baby. You did it because you love them and want good things for them.

I don't know why this hasn't happened for you. But I agree that you deserve it. Just like you deserve a lot of other things you haven't had in life. But I have a personal belief in a loving Heavenly Father who is mindful of his children, who can see the full weaving of this world of ours while we can only see individual threads.

I think he's creating something wonderful for you, even if it's in ways that we can't understand.

And? I don't think any of us deserve our kids to start of. I think as we grow as parents we get to the point where they're as lucky to have us as we are to have them. And you're there, babe. You really are. Those kids of yours are so, so very lucky.

That is a wonderful picture.
Seriously, no one really *knows* how to raise a child the "right" way. You obviously know how to teach your children love and respect. What more is there to being a good person?

You DO deserve a baby.

I worked in a maximum security prison for males. Part of my job was to input the inmate's info into the computers and this included the detailed reports of their crime. The baby rapers/abusers/killers? Made me want to throw up. And also made me wish for the biggest dude on the cell block to make them his bitch.

girl..you do deserve tons. Ask your kids and they will tell you, ask Jason.

I frantically went back to check the emails we sent back and forth yesterday to see if I wrote that. (I didn't -- but I obviously feel that way because I checked!)

But. . .I appreciate what you said. The fact that you aren't playing the "I deserve this because. . ." card means that you see the bigger picture. And, the fact that you are so grateful for boy child & girl child -- well that's just the icing on the cake. They really ARE a blessing and a joy to watch from a distance!!

Your children are gorgeous and obviously so happy. You do deserve the best, despite teaching them words like douchehole and assbisquit. I think those are funny words, too, and I would laugh :)

"One of the main reasons I hate Wal-Mart so much is that every single time I go in there some slag dragging around three or four kids who are completely unwashed and nasty looking and she's eleven months pregnant and verbally abusing the children and smacking them and stuff" - What the hell is it about Wal-Mart? I seriously hate that place.

I get so angry about those moronic mothers at Walmart.

Or that horrible mother in Orlando who punished her tantrum-throwing two-year old by spraying her down with the car wash hose.

You? Do deserve those beautiful kids of yours and I think you're a fantastic mom, whose kids will still love her like crazy when they're adults.

The reason you should know your deserve what you have (and what you want) is because of how much you appreciate it. Or, for that matter, never take it for granted. I can't even say that. I wish I could, but I can't. That, is why you deserve it. And yes, there are other people out there who probably deserve a baby (or whatever they are greatly desiring) who haven't gotten what they want. But that doesn't make your desire or want any less.

Chick, what you have is way cool.
And the more I get to know you, I still wish we were neighbors.

Your heart is in the right place. As one of those people with a ton of kids and "eleven months pregnant", I just want to say that for every woman I meet who wants a baby but can't have one, I wish I could give her one. I love each of my children deeply, and I pray that the world is made better by the people they become.

You totally deserve what you have (and more!). It's easier said then done, but don't be so hard on yourself.

Oh honey, yes you do! You deserve every bit of it!!!

You may laugh when they say "assbiscuit" (hell, who wouldn't?), but you love those kids and you are thankful for those kids.

There are parents out there that do not feel the same gratitude, so don't think for one second that you do not deserve them everything else you have.