Pictures and other crap. 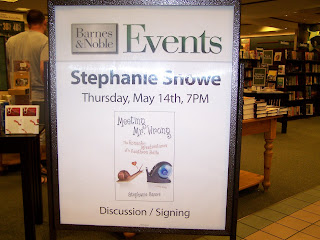 I realized something about myself recently that will sound really strange and probably come as a huge surprise.

STOP LAUGHING. I REALLY AM.

I'm a lot better on paper than in person, I believe. People are so surprised to hear that I'm shy and well, let's face it, socially inept. But I am.

Needless to say? The past few days have been kind of hard for me. Not a bad hard, but still. Hard. 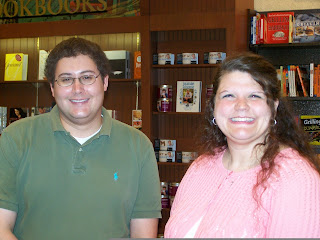 This nice guy made my life easier. His name is Rob and he's the Events manager at Barnes and Noble. He had actually read my book (which was so helpful, honestly) and made me feel right at home. He even brought me water in a fancy-shaped bottle and a thin-tipped Sharpie pen. I love Sharpie pens. 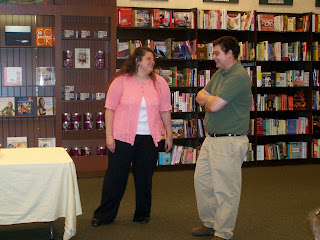 To further ease my mind, he told me a hilarious story about someone who recently brought the author of "The Shack" a vial full of their tears. To a book-signing. For reals. I had one strange experience (more on that in a minute) but nothing like that. 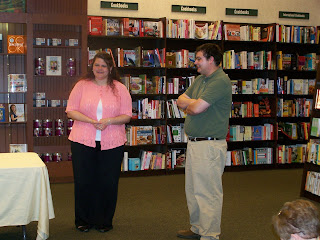 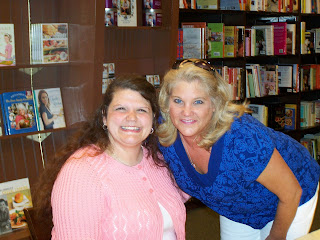 This is my friend Rebecca! She came out to support me and brought her son and daughter-in-law. They were all so nice. And funny. And wonderful.

(Isn't Rebecca pretty? Can you believe she's old enough to have a married son? I know, right?) 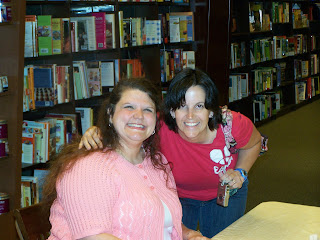 My friend Amy drove a long way to see me too! I was so touched!

I don't think I got a picture of my friend Karin, who came to see me also. I didn't know she was coming, so I was so happy to see her! 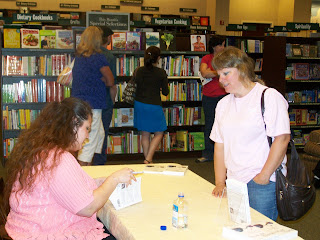 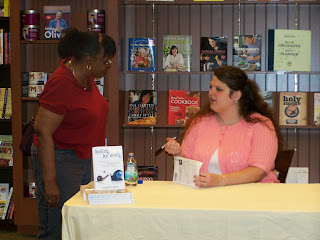 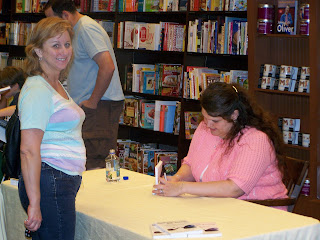 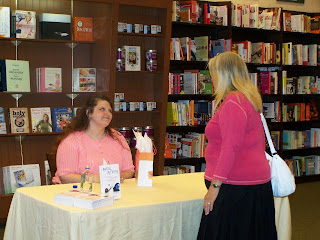 It was mostly a great time. Especially great? 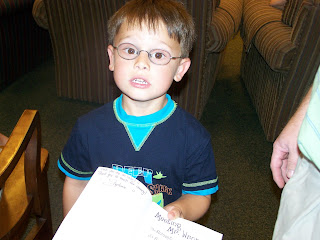 I still don't know how his name is spelled. I said, "How do you spell your name?" and he whispered, "Zack".

Not great was a young man who made me extremely uncomfortable. I have a few pictures of him, but I will decline to post them here. I will post a picture of my face when someone was telling me about him and what he was saying. 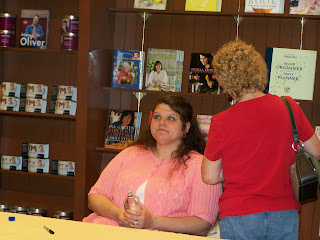 I was a bit alarmed. Enlarge the picture for the full effect.

It was nice to have a lot of my family there: 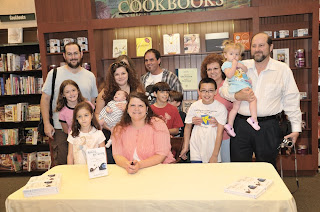 And the cake was tasty too. 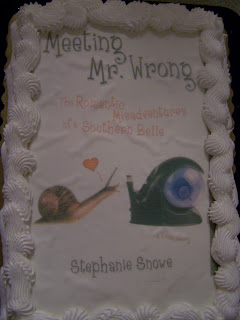 No matter how long I am blessed enough to get to be a writer, I'll always prefer writing over any type of publicity or promotion. But I think maybe next time it'll be okay. 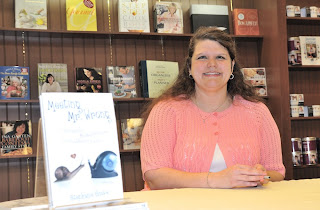 Posted by That Chick Over There at 9:19 AM

Whew...you can't see down my shirt, too much. I am extremely relieved. I just wish we could have spent more time with you. Come back to Greenville!!

Oh hell this made me cry. I'm so proud of you and how gorgeous did you look? Ad I wanna know all about freaky guy (e-mail e-mail!) But mostly? I love you bighugetonsandlots. You're so fantastic. <3

You look so CUTE! I love that outfit. I need to hear what that man was saying about you - OMG! And they made your book into a cake! And I want to steal Zack/Zach and take him home to my house!

Oh man, I want a picture with you :) I know I told you I could not be there and then I just go and show up and stuff but I did not bring a camera ...how smart was that.

And just in case anyone is reading this. Stephanie is not shy...at least you don't know it when you are talking to her. She is so nice and friendly.

As an added bonus, boy child and girl child were there too :)

Thank you Stephanie, you made my night :)

I'm so impressed! You look great!

Wish I was closer; I definitely would have stopped by.

Oh, I wish I could have been there. My friend, the author!!

(Of course, I'm dying to know what creepy boy said).

Who was the young man? What did he say? Did he attempt to claim to be the long lost son of Stephanie Snowe? Or was he old enough to be claiming to be the star of one of the stories?

Who was the young man? What did he say? Did he attempt to claim to be the long lost son of Stephanie Snowe? Or was he old enough to be claiming to be the star of one of the stories?

So exciting- I am so very glad for you. Peace.

This is just awesome. You look just great and that cake--how fun!

I'm so impressed by you!

Damn, I missed the cake!

And that guy asking where to meet people was pretty weird. Glad I was there to stand guard!

It was so great "meeting" you in person!

You look perfectly at ease and comfortable at the event. You are doing so great! And you look marvelous!

glad your signing was such a success! And a lovely cake.

So, I'm not a lunatic or anything, but I blogged about you and it only felt appropriate to let you know. Love Love Love your stuff, by the way.
www.tangledeutopia.com

Here, this one is prettier:

Congrats on your book signing!

And you can't just leave us hanging about the dude! Do tell!

Yay! You're famous enough to draw in the nutters - woot!

You look fab and I'm so stinkin' proud of you!

Oh you sweet soul. I completely confused you! I pray that doesn't insinuate what kind of writer I am! I haven't finished my book. There's been no book signing yet! I am using your post as "Where I see myself in the future!" (i.e. "insert my picture here)
As for the dude...I think you are talking about that man I now call my husband. We've been together 5 years now

That's a different Stephanie. :) I'm not that pretty.