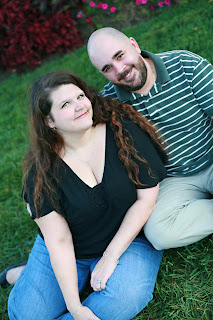 Not long ago I was emailing someone dear to me about "the one".

The right one. The only one.

We were talking about what if's? What if this person is the right one and he's slipping away? What if I've already found the right person? What if neither one of them is the right one? And isn't it logical that the person who is most like you, and likes the same things as you, would be the right one?

The right one for me is thirty-three now. Not terrified by the small people who live in our house. Befuddled by them, often. But no longer terrified.


Not like me in a lot of ways. The right one for me is a Republican who hates Mexican food and rarely reads. Who watches television news and the weather when I can't stand either.

The right one for me is a lot stronger in his faith than I am in mine. Who makes decisions swiftly and rarely regrets anything. Who, really, honestly didn't realize that not everyone makes up songs and inserts their own names in them to make them more interesting.

Who is not perfect. He frustrates and destracts me to no end sometimes. Who never laughs hard enough at my hilarity. Who is painfully human sometimes.

Who thinks, for God knows what reason? That I'm exactly right for him.


Six years ago, today, I married the right one for me.

I had no idea, none at all, that I would love him more today than I did on that day.


Because he's the right one.
Posted by That Chick Over There at 1:07 AM

I love the pic of you & Jason that you've posted :) Happy anniversary, and many many more!

Happy Anniversary!! I wish many more to come for you both!

Happy Anniversary! And may you have many, many more.

This was such a sweet post. Happy anniversary!!!
I get to marry my "One", in just under three weeks. I'm so lucky.

This made me smile! :) Have a great anniversary!

Doesn't knowing that he is truly the right one simply make your heart sing?

Happy Anniversary! I'm glad you found the right one for you.

Happy Anniversary! I'm glad you found "the one"!

the planet of janet said...

Happy anniversary, Stephanie. Beautiful pic. I'm so glad you found the one.

Y'all make such a cute couple. Happy Anniversary!!!! Im so happy you found your one, and you give me hope I'll some day find my one!

I'm sniffling too. Being with the one just makes me all squishy sometimes.

I'm new to your blog, and not quite sure how I found you. But I've been lurking for a little while now. :)

This was beautiful! I hope you both had a spectacular anniversary!

Somtimes you never know what life itself has in store for you. I hope things continue to go well with you and yours.

Happy Anniversary, I hope you have that love far into the future.