Recently, I got a new cell phone. 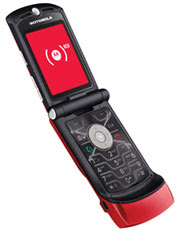 Jason was totally digging it, so he asked me to go get him one. Except he didn't want red, as it is deemed a "girl" color.

So, off I went to the US Cellular store today to purchase his phone.

I went in and told the salesperson (we'll just call him Biff) that I wanted to purchase a phone for the second line on my account and that I wanted the Silver Razr.

Biff was quite chatty, asking me all manner of questions while he looked up my account. Where do you work? What do you do there? What's a normal day like for you?

Suddenly he stopped and said:

"You have the most beautiful eyes I've ever seen."

He said, "So. Who's the second phone for? Your boyfriend?"

Biff looked perplexed, "Husband? Darn. I thought he was your boyfriend."

"See," I said, pointing to the screen. "Note that we have the same last name."

People. Seriously. He was probably 22.

I laughed. Then I laughed harder. Then I couldn't stop laughing.

Biff pouted. "No seriously. I was."

"You thought I had a boyfriend and you were going to ask me out?" I said. "Seriously?"

"Biff," I explained. "I'm a happily married woman. I have twins that will be nine tomorrow. The last thing I need is a date."

Biff's face turned kind of red. Like my cell phone.

He quickly finished my transaction and even called me ma'am as he sent me out into the cold, dark night.

Still, I hope he finds a nice chick. Biff's need love too.
Posted by That Chick Over There at 4:52 PM

he has your number.

Hahahaha! I was just going to type the comment alpha dude made! He does have your number!

Ahh...that could make a gal's day in so many ways. Not the least of which giving her something to amuse her blog fans with. ~snigger~

Hey, think of it as less that Biff is a goob but more like 22 year old boys find you hot!

Tell Jason your phone isn't girly. I have the same phone--in PINK :) Jimmy has it in silver!!

OMG..that is too funny!! Doesn't it make you feel good though?? having a 22 year old hitting on you?? Even if he was a "goob" you still got it girl! Go you! DO you like the phone?? I've been thinking of a new one myself!!

Aww, Biff. It did make you feel good though right? Even just a little bit?

I need a Biff. (I am completely invisible to the human man. Always was.)

And attracting a 22-year-old even? You wild cougar you! Roarrr.

Did you get discount??

Flattery comes at a cost!!

Just remember "the eyes have it" - everytime.

Dude, the twins will be NINE tomorrow!?!?! That's AWESOME! They are growing up like crassy! Happy Birthday to the Boy Child and the Girl Child!

Hey you should feel flattered, lol. Great story; I bet that guy won't be hitting on customers anymore :-)

I'm with everyone! That would totally make my week or month. Maybe even my year. The only "Biff's" who ever hit on me are far from 22 and they work at the Kwik Oil place. At least Biff gets to wear a polo to work!

I would like to just follow you around for a week to see all the crazy shit that happens to you!