You wish you had one of these.

This? Is my daughter. 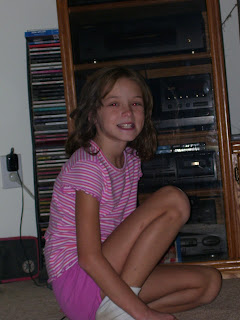 Tonight the children were testing for their green belts in Taekwondo. Boy Child has been extremely excited and not nervous in the least.

Girl Child has been afraid. She gets nervous when she has to perform alone. In a group she's fine, but she doesn't like everyone to watch her.

Tonight she sat in her little group with her brother and the other yellow belts. They called her name and she ran to her line.

And she? Absolutely amazed me.

She? Made it look really, really easy.

When she was done, she sat down on her mat, confident in her ability to succeed. She looked over her shoulder at me and gave me the smallest of winks.

Like she was saying, "Yeah. That's right. I ROCK."

But I really want to be.


She can do anything. Anything.


You know how sometimes people say, "My heart could have burst in my chest?"

That's how I felt, watching this amazing kid, doing the things I wish I had the courage to do.


And she? Was the only one with pink toenails. On the whole floor.

She totally rocks.
Posted by That Chick Over There at 7:22 PM

Good for her, you've raised her well : )

She rocks because YOU'VE raised her that way!! The way I felt when I was a kid (and even now) helps me learn to teach Morgan the opposite. To not doubt herself, to not hate herself, to always be confident.

boohyah on the pink toenails!

That's awesome! I sometimes look at my stepdaughter and wish that I could have been as small and pretty as her when I was a child. I'm so glad that she doesn't have any self-esteem problems yet.

She is the way she is because of her mother's genuine and unconditional love for her.

Congratulations on the new belts! I started TaekwonDo last fall with my sons and am currently training as a green belt (working towards my blue stripe).

And good gravy is she getting beautiful in that nearing young adulthood kinda way unlike the adorable childhood way. She's breathtaking. Good. Grief.

And lordie does she resemble you. I'm so glad she has you as a mom to allow her to be so many things.

Tell her purple toenails next time. That's what I'm sporting! :)

She is pretty amazing!

The way you describe her is pretty much exactly how I feel about my baby girl. She is funny, smart, outgoing and fun.

Oh my gosh, you totally made me cry. It's so amazing when we see our kids do what we couldn't do. And it's because of the way you raised her. Good for all of you. Now I have to blow my nose.

Now that I am FAMOUS (see potato soup recipe), I must now comment on every single post and not lurk.

Your daughter is beautiful! How scary that must be these days. My boys are handsome, but luckily my oldest (13) is such a doofus I'm pretty sure I'm safe from premature grandmahood and the younger (12), even though he had a "girlfriend" who called him every day (I think they broke up though, because she hasn't called in about a week), isn't really interested in girls "like that" ...YET!

Obviously she is amazing. As is Boy Child. For they are yours, and you are a pretty amazing mom.

Holy Toledo, Batman! I think this is wonderful. My friend, Beth, is making me write Caroline's story for the website she's created for her.

I have literally been writing for the past two hours. . . my hands are tired, my eyes are bleary from crying, and my heart is kind of at that "bursting" stage.

Then I came here. . and read this. You had me at word 1 - but when you said she turned and kind of winked at you---???? Edison has done that to me before, and it just made me so glad to be alive!

WTG! It's scary getting up there and testing alone!

With my daughter it goes through phases. She's a black belt now and every now and again she gets a wee bit cocky. I think that's just her way of testing the waters and faking like she really has nerve. (She gets nervous, but has had to test alone also - amazing how they "turn it on" and afterwards they just give you that knowing look. I wish I'd had that at that age, too.)

That's awesome. And I know what you mean...seeing your little girl do and become what you were afraid to.

I just wanted to let you know that I have now officially read every one of your posts all the way back to November 2006. I actually stopped reading the Picoult book (19 Minutes) so I could focus on a much better story. In fact, this may be the best "book" I've ever read. Truly endearing characters. Good laughs. Sweet tears. Tender moments. Epic love story. Can't wait for the next chapter. (I'm sounding a little stalkerish...but don't be scared...I'm actually pretty normal)

And way to go Chick, for raising her to be the kick ass Girl Child she is :)

and so does her mom.

Girl Child is so cool.

Because her momma is cool. :-)

Oh my goodness she looks a foot taller in that picture than the last time I saw her! She is all legs and just look at that beautiful FACE! I love that kid! Tell her I said GOOD JOB on her test! (And rub Boy Child's fuzzy head for me and tell him good job too!)

I was more like you were at that age than her, and it amazes me to see my nieces being all self-assured and confident. But you and I turned out ok despite it, right? So it's all good.

Have a great weekend!

What an awesome story! You can certainly take credit for the amazing girl she is! :)

Girl Child rocks! And so do you.

Sit back and bask in her glow and know that you raised her to be that way, she learned it from you.

I hope I do as good a job with mine!

She rocks because you rock as her mom!
Love that my fam just started Taekwondo...hate how expensive it it, though:o

A green belt already! They are getting so grown, it's killing me!

Did you know I have a black belt in Taekwondo? True story! Tell Girl Child (and Boy Child) that I think they kick ass. <3

Must have been very cool to see that and know that YOU are the reason why she is the way that she is.

You are a great Mom Chick!

Go Girl Child!!
She rocks and so does her mommy! And yes she does owe that to you, you're obviously a good mom.

Not only is she amazing, she is beautiful! Yep, I wanted one of those, daughters that is. I only got sons, they're awesome, but I still would have liked to have a girl.

That's awesome! I think that's a testament to how you've raised her. You have instilled these qualities in her and you should be proud of yourself for doing so.

You just totally made me cry. I know exactly what you mean. Exactly.