This is how we do.

Yesterday the Boy Child was sick so we did not get to do anything birthday related. It was sad.

Today, the Festival of Puke is over and Boy Child felt like doing things like going to Target to replace the DS he recently broke, going to the Mall to get new games, and going to our favorite bookstore to buy...cookbooks.

Since Boy and Girl Child turned 9, they have been asking when they will be able to learn to cook. I've been telling them for a year now, "You can learn when you get a job you twelve sandwich eatin' slackasses!"

No just lying. I told them they could learn when they were 10.


Okay, but here's the thing y'all.


Most of the "cooking" I do? Is making things out of boxes. It's not REAL cooking. I'm not out milking cows and milling my own wheat or whatever the crap people who do real cooking do. I'm hanging with Betty Crocker.

So we got new cookbooks. And all of us are going to learn together, I guess, how to make things with flour and paprika and...you know, butter. Or something.

But for today? We started with boxed cake mix. You have to start somewhere right? Right.

Okay, for real. I don't own a round cake pan. At all. I had to use glass pie plates. Lame! 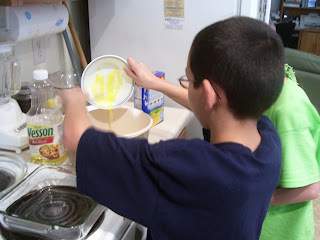 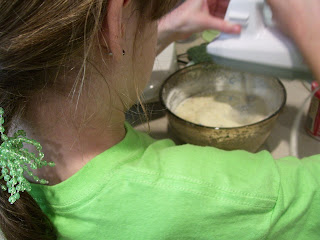 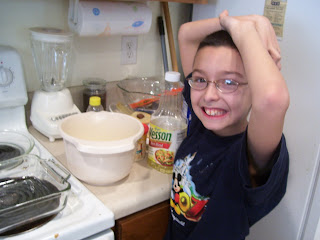 Apparently this cake stuff is pretty hard. It makes your pits all stinky so you have to air them out. 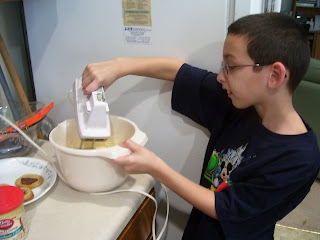 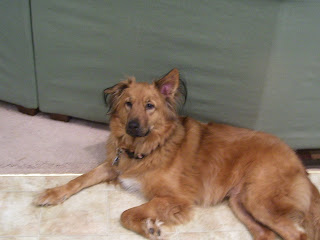 Ginger, as is typical, viewed the entire event with mild disinterest. 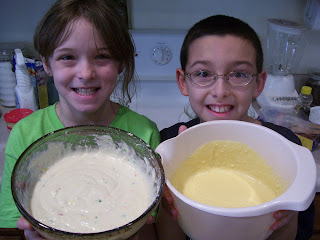 Rainbow chip for Girl Child. Yellow cake for the Boy. 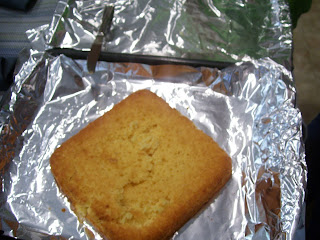 Okay, so it's not pretty. Real cooking isn't pretty you guys. Apparently. 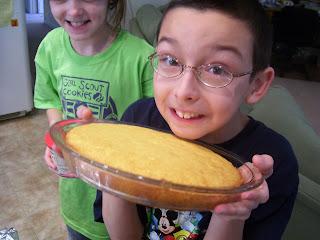 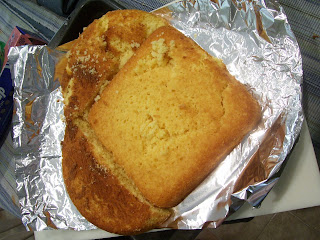 That looks even worse doesn't it? But once the frosting went on... 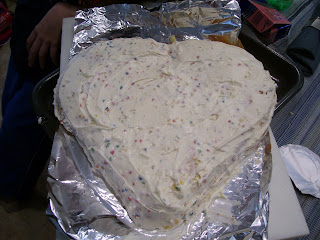 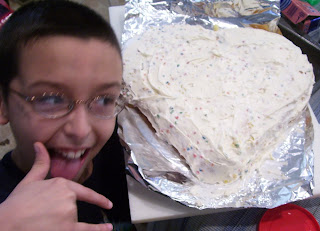 Gangsta Boy Child thought it rocked. And he ought to know. 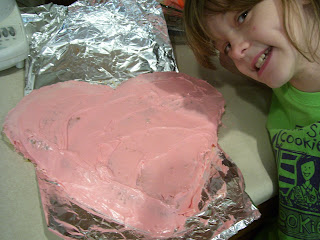 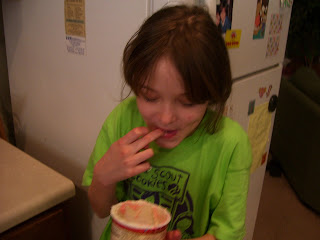 She likes it too.

So that went pretty well, even if it's not real cooking. Tonight we're going to tackle Southern fried chicken. If I can find that stupid cookbook...
Posted by That Chick Over There at 4:09 PM

OK I love these pictures! Aren't you glad that you let them cook. I love the comment about the dog too. And the fact you call them Boy and Girl child. Great blogging!

get them Elaine Corn's Now You're Cooking. simple recipes but also explains everything in the margin for people who don't know how to cook.

This is great. right now we're trying to help Caroline "help" us hang up the phone.

I really need to capture pictures of it, because it's hilarious.

Happy Birthday to the two greatest (as of yet) unnamed kids I know!!!

It's really hard to think when I first knew you? They were small small people and now? They are grown and hilarious and rocktacular and COOKING people.

I'm just SO impressed how they cut the round cake in half and shoved the square one up it's arse and made a heart out of it.

It's Craptacular Cooking at it's finest!!

Wooo-Hoo,you're cooking with Crisco now girlfrend!
The cakes are perfect......how was the chicken?

There are some kids cookbooks out there too...one of my first was of that ilk and it was pretty good. If I could only remember the name....

That is too "real" cooking. You didn't even use the microwave. Did you? I hope not.

That is totally really cooking and you guys looked like you had a blast! Sounds like a great activity to learn to cook together.

Oh! I need a cookbook where they explain things in the margin. Sometimes I don't know things that the recipe assumes EVERYONE knows.

Your kids are just awesome. I luff them!

I loved teaching my boys to cook. I did! I taught them jello first. I know, just add water and refrigerate, but still, they had to measure and 'wait' for it to be done.

They now make stuff like shrimp scampi and French onion soup. Fancy stuff. They love it.

It's important to teach kids the very basic things, how to shop, cook and clean.

I didn't know about that law about kids being 10 before being allowed to cook.

I've been allowing Little Man to dump the milk into the pot when I'm making Kraft Mac&Cheese for a year now.

Please don't call CPS on me.

What? That's not called cooking either?

Oh. That's a relief then.

Best post ever! I love the photos of your Childs.

Box cakes rock, and awesome job they did on making hearts!

That's pretty much the same look my dog gives me when I'm making something non-meat in the kitchen. If there's chicken or beef involved? She's all over that. :)

Loved this post! Your kiddos looked like they were having so much fun, and that's what it's all about.

And your dog? Is precious. I especially love the dark colored whisps of hair hanging off her ears!

I am gonna have to tell Kaylie about this 10 years old rule. Maybe this will avert some of the whining and pouting and what not.