Step away from the baseball bat...

Admittedly, despite my Southerness I don’t know much about country music as a whole.


Well, that’s not fair. I know nearly every Patsy Cline song by heart, as she is my idol. Also? I kind of sound like her when I sing. 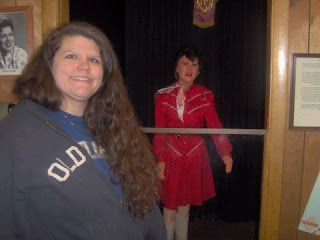 See? She’s my girl. She and I could totally go walking after midnight.

Anyway. I love Kenny Rogers and his hairy back. I think Loretta Lynn was the absolute fo-shizzle. I also know most Johnny Cash songs and a whole, whole lot of Dolly Parton songs. Dolly is another personal favorite. I can belt out “Jolene” with the best of them and I think that crackwhore Whitney Houston did not do, “I will always love you” justice. I just think I could meet her and she and I would be BFF. Also? I think we are somehow related, and not just because of the big old bazoombas. Her mother, I think, used to have my maiden name and we are all from up in the holler somewhere.

But country music today? I know almost nothing.

Which is why I was a bit disturbed by the lyrics to the gorgeously beautiful Carrie Underwood’s song, “Before he cheats”. To wit:

That I dug my key into the side
of his pretty little souped up 4 wheel drive,
carved my name into his leather seats,
I took a Louisville slugger to both headlights,
slashed a hole in all 4 tires...
Maybe next time he'll think before he cheats.
I might've saved a little trouble for the next girl,
Cause the next time that he cheats...
Oh, you know it won't be on me!

Yeah. About that? While I’m all for Girl Power and whatnot, it just doesn’t seem wise to direct encourage people to commit vandalism such as this.

As someone who has been cheated on (by not only boyfriends, but a spouse as well! I'm AWESOME!) I can understand the desire to do something really, really nasty to someone who hurts you. When my ex-husband was screwing around with Mrs. Slutty Pantsflyoffy, I really wanted to call up the place that they both worked and tell on them, because dating someone you worked with was a complete no-no. Also? I wanted to call up her husband and tell him, because I just sort of thought he might need to know that the person he had been married to for FIFTEEN YEARS was, you know, sleeping with my husband.

Because looking at the situation with a critical eye? Those two were really freaking pathetic.

And why should I lower myself to their level of patheticosity?

Part of me thought, “He’s my husband and she can’t take him away from me!”

And another, much bigger part thought, “If he’s such a waste of human flesh that he is cheating on me with THAT? Then they deserve each other.”

In the end, he’ll get his. It will suck for him. And you will laugh, plus, retain your dignity.

Also? If you want to flip him a bird, that’s okay. That never hurt anyone.
Posted by That Chick Over There at 8:23 AM

I personally LOVE that song but I do agree that the baseball bat is a bit extreme.

Then again..didn't Angela Bassett light her husband's belongings on fire in Waiting to Exhale?

Go check out the lyrics for "Ticks" by Brad Paisley. You will die.

Going to wash my brain now.

Sometimes country music makes my head explode. Josh doesn't see why. "It's just music" but listen to the WOOOOOOOOOOOORDS!!!!!

You should see the music video for that song. My mom and I just about bust a gut. Have you ever seen the movie "Carrie"? Just think about what Stephen King's "Carrie" could do to a Dodge Ram...

Yes, I think you are right. Kudos to you for conducting yourself with integrity and class.

As far as the tick song....... I never liked brad paisley anyway and I just googled that song. Gross!

I think that I will have to go listen to that song. Not that I would do any of that either. I think your dignified way is much better.

I think I'm more the quietly vindictive type. You know, over-salt his food, that sort of thing.

And a happy Tuesday to you, Chick!

Anything else I say right now will just sound silly.........

Also, that song was clearly written by a man, because no woman would refer to a baseball bat as a Louisville Slugger.

And I guess while she's destroying somebody else's property which will surely land her in jail, she's not asking Jesus to take the wheel, is she?

And kudos to you for taking the high road with scummy ex.

The lyrics to that song have always bothered me. Good on you for being dignified.

I like the music for the song. I don't pay alot of attention to the lyrics though, cause yah thats just not me either.

By the way I love Dolly Parton!

I am a big country music fan. There are a lot of songs with really good meanings. Check out my sidebar with the lyrics to "Stand" that is so my favorite right now and my theme song of the moment.

I wanna hear what silly things alpha dude was going to say!

I applaud you taking the high road. Me? I'd WANT to, but I think my Irish temper would rear its head first and I'd call the husband and give him the 411 :) I'm evil like that.

Very well stated point. I'm not a country music fan at all, but I have heard that song....

The baseball bat is a bit much, but I wouldn't put it past some women to do just that.

I've actually known a few to be honest.

Today's country stinks. Can't stand it. But give me some good ole Johnny Cash any day!

Patsy Cline- my hero. We could sing a duet. Except I can't sing. Who am I kidding, that's never stopped me before!

I love that word!!

I never did anything overly vindictive to my ex when he cheated on me (other than sneak around to try and catch them together - which I did). Eventually, what hurt him the most was that he has no relationship with his sons (his doing completely, not mine). What comes around, goes around !! I am proud of my sons - he still doesn't have a relationship with them to this day probably because of his guilt for not being there for them when they needed him the most. I hang my head high - he chooses to be absent even though he and his new family live in the same area as we do.

I'm embarrassed to admit it, but I keyed the car of an old cheatin' boyfriend as he was driving away from me to go to her. It was over 15 years ago, and that immature haunts me to this day.
You are one class-act, girl!!!

I think one of the most obnoxious country songs out there is "Billy's Got His Beer Goggles On" by Neal Mccoy....I love it (though I will deny it, if you tell anyone)!

Ya know that song is great. She could have been a BOBBITT (Back on the East Coast they just cut them off). If you dont know what im talking about ask SJ or BS they can tell you. But you did the right thing by walking away.

I love, love, love, all of those singers that you mentioned.....Wow, I love your hair! I think it is almost as long as mine is!

I need you to script hilarious things for me to say in day-to-day conversation.